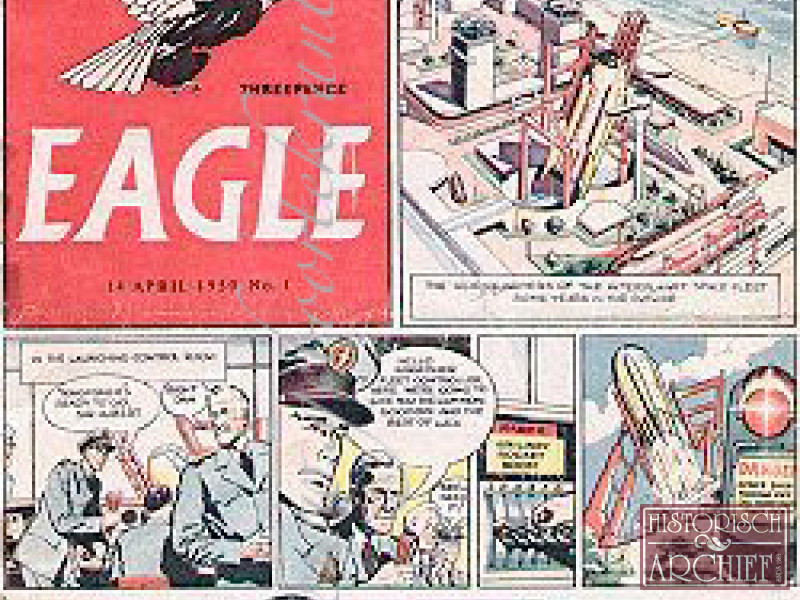 Eagle was a seminal British children's comic, first published from 1950 to 1969

Then in a relaunched format from 1982 to 1994. It was founded by Marcus Morris, an Anglican vicar from Lancashire. Morris edited a parish magazine called The Anvil, but felt that the church was not communicating its message effectively. He was also disillusioned with contemporary children's literature, and with Anvil artist Frank Hampson, created a dummy comic based on Christian values. Morris hawked the idea to several Fleet Street publishers, with little success, until Hulton Press decided to take on the comic. - Following a huge publicity campaign, the first issue of Eagle was released in April 1950. Revolutionary in its presentation and content, it was enormously successful; the first issue sold about 900,000 copies. Featured in colour on the front cover was the comic's most recognisable story, Dan Dare, Pilot of the Future, created by Hampson with meticulous attention to detail. Other popular stories included Riders of the Range and P.C. 49. Eagle also contained news and sport sections, and educational cutaway diagrams of sophisticated machinery. A members club was created, and a range of related merchandise was licensed for sale. - The front cover of the first issue of Eagle, with artwork by Frank Hampson. Advances in printing technology offered a substantial improvement on the original issue's faded colours. The logo was modelled on the top of a large brass inkwell owned by Marcus Morris, the comic's founder, and typography was by Berthold Wolpe, designer of the Tempest font